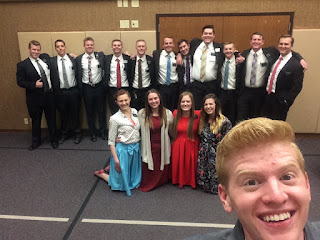 Hello everyone!
Another wonderful week in the Heartland! This week has proven to be anything but regular. Some things were brought into stark focus Friday. After zone training, we went home through Lyons because we had made an appointment to eat dinner with the Enfield family who lived just outside Lyons. We worked for an hour or so before leaving town. We arrived at their home just a little after six. We had been there for only a few minutes when the house started filling with smoke. Brother Enfield ran outside to where the wood burning stove that heated the house was located. We all followed. The shed that housed the stove was completely engulfed in flames. We ran back into the house and grabbed anything that looked valuable and got out. Brother Enfield called the fire department but by the time they arrived it was too late. The house was too far gone to save. In all of the commotion, we were not able to leave until about eight. At that point, the entire house had burned to the ground. In a matter of two hours this family lost nearly every materiel possession they owned. And yet there was no "weeping and wailing and gnashing of teeth" as you might expect. They gathered their family together and rejoiced in the fact that each one was present and accounted for. They were at church today and not a single plea for pity was extended. Why have I caused you suffer through is long monolog? I learned a powerful lesson that night. There was nothing in that house that was more important to that family than each other and their testimonies of the gospel. There is nothing on this earth that can be more valuable than this gospel. This I have come learn in a very powerful way. We have a chance to help someone else gain this perspective as missionaries. Now we must go do it.

Saturday we had our first real lesson with Orlando. We taught him the restoration with the pamphlet and he loved it! He told us he felt good as we taught him and he closed the lesson in one of the sweetest prayers I have ever heard. He is in Kansas City for the next couple days but we are going back Tuesday for another lesson. I can't wait to see where it goes from here!
Posted by Ron Boyer at 5:36 AM